Welcome back, Skokie Theatre! In March of 2020, “Cooking with Bubbie” was slated to open here, but due to the pandemic lockdown, the show was put on hiatus. I am now happy to report this hilarious, heartwarming and high-energy musical just opened with Chicago comedienne Jan Slavin and Gold Coast Cabaret Award winner Carla Gordon alternating the role of “Bubbie.” 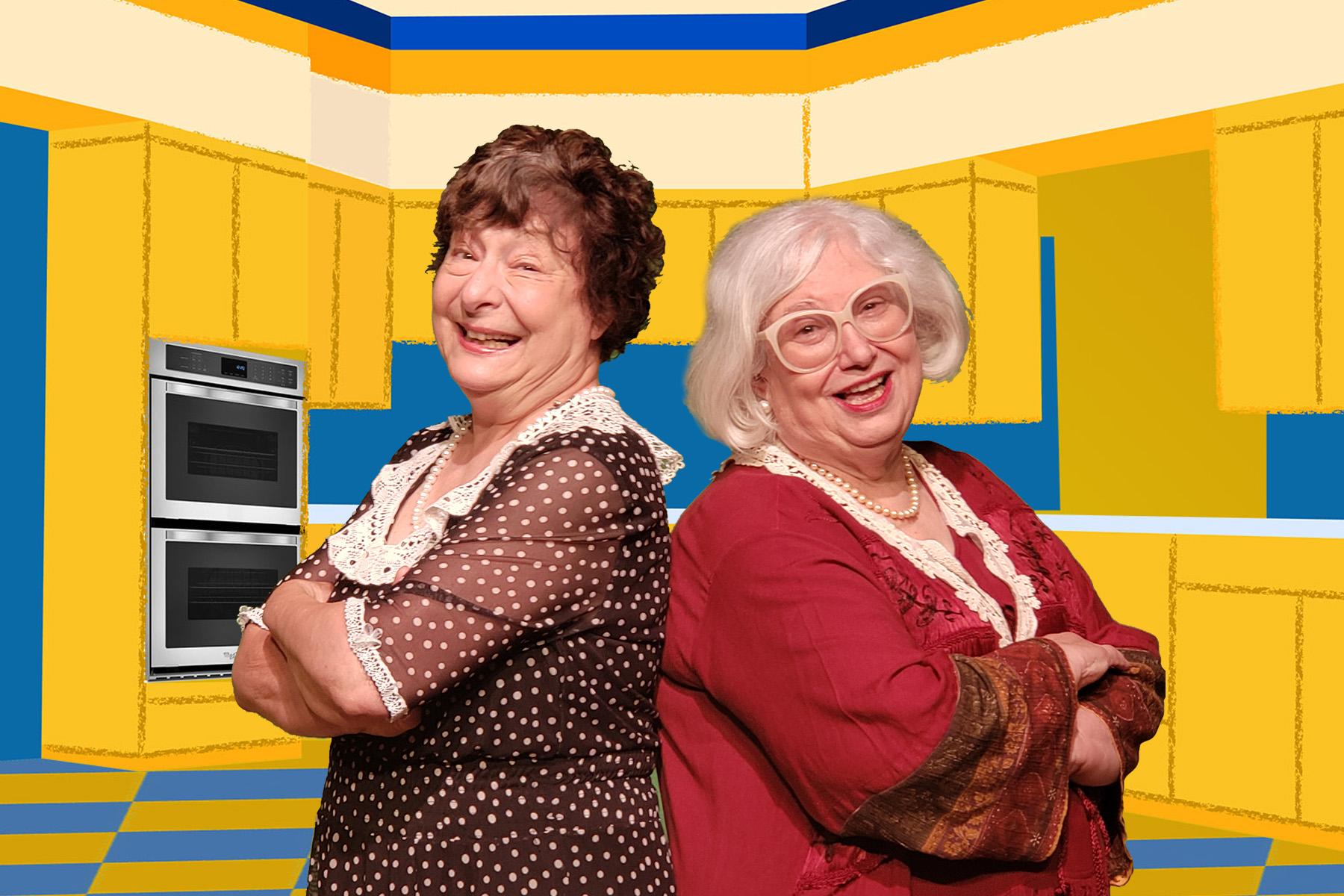 The setting of Cooking with Bubbie is a “taping” of a fictional TV cooking show much like today’s celebrity cooking shows. But this one features famous recipes from “Bubbies Cookbook” like brisket, kugel and mandel brot, the “original Jewish comfort foods”  Plus, the show takes it one step further with dancing, comedy sketches, and 14 original songs including “Schmaltz”, “A Little Nosh”, and “Noshin’ on Hamantaschen.” The jokes were hysterical and the audience laughed throughout the performance. You’ll think you’re in the Borscht Belt.

On opening night, Carla Gordon starred and captured the essence of “Bubbie” with warmth, charm and a little feistiness on the side. Part advice-giver and always a loving Jewish grandmother, she talks to you from the stage like she’s talking to you in person. You’ll love her and want to hug her.

The show also stars Jessica Lauren Fisher, Jeri Hart, Jessica Surprenant and Connor Norton as the Bubbettes. Wilson Hicken entertains before the show on the piano and plays Bubbie’s schlemiel of a nephew, Sidney Lipshitz. Andrew Pond steals the show as J.T. in every scene with his many characters, physical antics and spot-on performance. He is a hoot.

Laced with images and videos of beloved Jewish comedians on two 55” inch TV monitors, the show will keep you laughing as well as move you in its tribute to the eternal survival of the Jewish people. (Be sure to enter the raffle for the TVs after the run has ended.)

Directed by Wayne Mell with musical direction by Aaron Kaplan and choreography by Marrianne Brown, the show features exquisite costume design by Broadway World Award-winner Patty Halajian. The costumes deserve a star of their own in this production, particularly for the Bubbettes, who sparkle in every scene.

Cooking with Bubbie is produced by MadKap Productions in conjunction with Orchard Street Productions and is written by founder and President, Jay Kholos. Kholos’ other work includes the Off-Broadway hit musical A Stoop on Orchard Street, Golda’s Balcony, Old Jews Telling Jokes and Wiesenthal.

Audiences are limited to 50 people with social distance seating also in place. In addition, a new state-of-the art air-filtration system has been installed and MadKap productions has implemented new protocols for guest check-in to eliminate crowded lines in the lobby. The performance plays without intermission.

This original musical runs now through August 22 and will travel the country before setting in New York. Skokie Theatre is located at 7924 Lincoln Ave in Skokie. Thursdays and Saturdays at 7:30 pm, Fridays and Sundays at 2:00 pm. Tickets are $45 general admission, $38 for seniors and students and can be purchased online at SkokieTheatre.org or by calling 847-677-7761.

Live theatre is back in Skokie…don’t miss it!

MadKap is celebrating its 7th anniversary year at Skokie Theatre and is the recipient of the 2019 Artistic Excellence award from the Village of Skokie Fine Arts Commission. Wendy Kaplan and Wayne Mell formed MadKap Productions in 2012 and have premiered ground-breaking new plays like Clutter: The True Story of the Collier Brothers Who Never Threw Anything Out and Mr. Shaw Goes To Hollywood, written by Emmy-winning playwright Mark Saltzman.

August 16, 2018 Eucarol Juarez Entertainment 0
Spread the love
Spread the loveThis past Thursday I attended Joking at the Skokie-Here Comes Trouble at the Skokie Theater. A week filled with comedy, this was the kickoff show.  Featuring Brad Walkow, Eunji Kim, Andrew J. Pond […]

One Night Only – An Incredible Evening of Entertainment in “Torch, Sass and Swing!”

July 7, 2018 Mira Temkin Entertainment 0
Spread the love
Spread the loveComing to the Skokie Theatre for one night only, Friday, July 20 at 8 p.m. is an unforgettable evening of torch songs, smoky clubs and great music by four of Chicago’s greatest talents. […]

American History Comes to Life in “1776”

June 29, 2019 Mira Temkin Entertainment 0
Spread the love
Spread the loveKnowing the heated arguments going on in Congress right now, one can only imagine what our founding fathers must have endured rebelling against England and King George in 1776. Fifty years ago, the […]