It may look like a tropical paradise with plush vegetation and the melodic sounds of birds, but to most French prisoners sent to this infamous penal colony, it was a death sentence. During our Viking Ocean Cruise  “From the Caribbean to the Amazon”  we visited Iles du Salut, the three island complex which includes the famous Devil’s Island.

Our cruise ship, The Viking Sea, was able to anchor close to Ile Royale island because of the unique configuration of our ship and some pretty darn good navigation through the shallow areas. We loaded into 240 seat tenders for the 10 minute transfer from our ship to the tiny docking area of “Ile Royale”.  Our visit was self-navigated with maps provided by Viking.

Some of the most notorious French criminals were sent to these “Islands of Salvation” which opened in 1852 and were known for the harsh treatment of inmates. The air was hot and humid with intermittent showers as we walked up the muddy dirt road to the top where many of the prison buildings stood. The greenery surrounding us was lush.

The monkeys ventured down from the trees to welcome us with open hands. Well, actually, they were looking for hand-outs of food and many of the other passengers on our trip had brought along snacks for the adorable looking creatures.The forty minute walk wasn’t too arduous and then there we were, staring into cells that measured five feet by ten feet including a so called bed.

As with most stops on a Viking Cruise, we had the opportunity the day before to learn some of the history of the Islands and the Penal Colony. Dr. Sherry Hutt told us that Napoleon III established a penal colony on the three islands as a means of finding a secure prison for the more than 6,000 prisoners that were then housed on ocean vessels.

The prisons of French Guiana were closed in 1949. During the close to 100 years they were open, between 70,000 and 80, 000 were sent to the islands. Only one in ten survived to the end of his sentence. We were told that there were few guards as escaping through the treacherous shark infested waters was a suicidal decision. 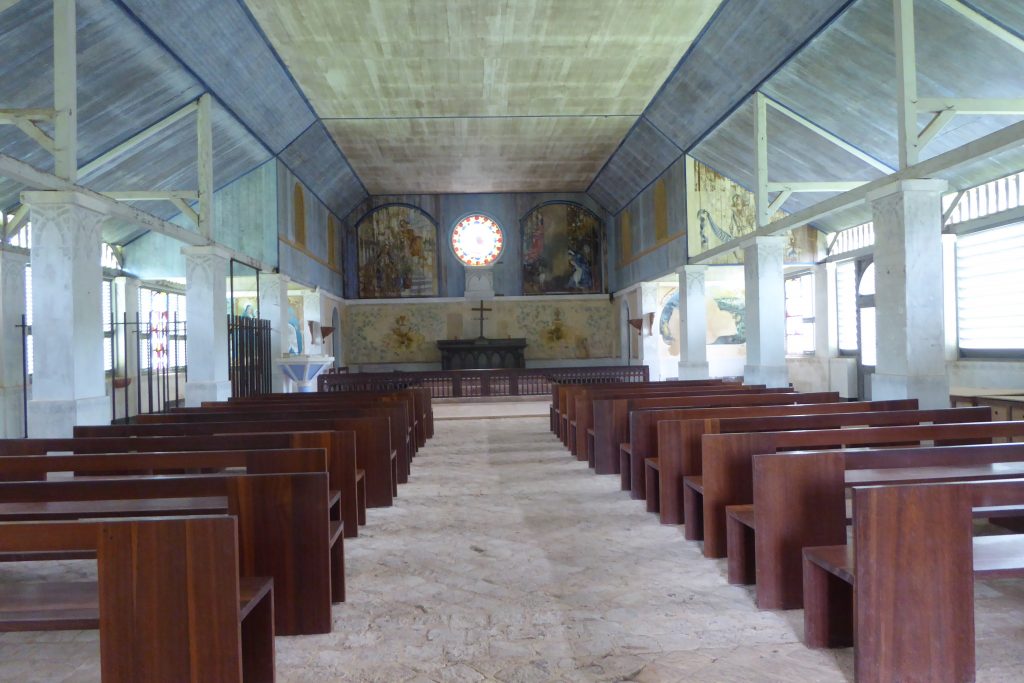 Ile Royale was the home of the administrative center, a church built in1855 by convicts and kept in repair, and a convent building which stands abandoned.

The guard quarters, low-risk prisoners, and condemned prisoners cells stand decaying. But visitors to these bleak quarters can almost sense the despair which must have permeated the grounds.

There are some who come to the Island on holiday from near-by French Guiana and stay overnight in simple guest quarters. A gift shop and small restaurant and bar serve these visitors and the day trippers.

In 1973, the movie Papillon was released starring Dustin Hoffman and Steve McQueen. It presented the Hollywood version of life on Devil’s Island based on the novel of the same name written by Henri Charrière who was convicted as a murderer by the French courts.

Before our departure, we stopped in a simple building called the Governor’s House or Museum. There we read about the Penal Colony’s most famous inmate, Alfred Dreyfus, a French Officer falsely accused of treason and sentenced to Devil’s Island.

The people of France were violently divided on their opinions of his innocence or guilt. Most historians support the theory that this was an anti-Semitic set-up to remove the only Jewish officer in the French army.  Dreyfus was finally exonerated after surviving five long, arduous years on the island, often shackled to his bed. There was a time when Dreyfus was the sole inmate on Devil’s Isle, 60 meters away from Isle Royale.

The lecture on board the Viking Sea gave us a sense of what we would see on our visit. The excursion gave us a memorable experience and look back at a noteworthy time and place of history.

May 28, 2019 Meagan Sargent Worldwide Attractions 0
Spread the love
Spread the loveThe sold out 2019 BottleRock Napa Valley, presented by JaM Cellars, has drawn to a close having entertained more than 120,000 attendees over the Memorial Day Weekend in historic downtown Napa.  In addition to headliners Imagine […]

November 5, 2021 Stephan Martin Pets 0
Spread the love
Spread the loveThe love of a pet is something that is hard to explain, unless you have a pet. Then you know that they aren’t just a pet, they are pet of your family and […]