Vicki Juditz, a nice Christian girl of German ancestry, loved Santa Claus and the Easter Bunny.  She met and dated Steven, a nice Jewish boy, who, unlike many of her previous boyfriends, had a job and played keyboards. She wanted to get married. She studied the Passover service, attended his family Seder and, as the youngest person at the table, flawlessly asked the “four questions”, all to no avail. Even though Steven’s parents loved her, he said “no,” he would not settle, and would only marry a nice Jewish girl. So she meets with a stern Rabbi, and cries when he says that, as a Jew, she will never again be able to celebrate Christmas or Easter—”How could I tell him how much I loved Santa and the Easter Bunny?” Nevertheless, she studies, passes all the tests, and converts to Judaism.

Twenty years later, (and not married to Steven), Juditz reflects about what her decision to convert to Judaism meant and how it transformed her.  She recalls how her perilous quest to become a Jew included meeting demanding rabbis, odd old Jews who eat at Canters Deli, and single men in Sukkahs.  While sitting in one with a Rabbi she finds herself inexplicably moved. She learns that her name may have Jewish origins!

Juditz moved to Los Angeles, and was prompted by an elderly woman she helped onto a bus—and befriends—to contact a charismatic Rabbi offering conversion classes. Thus began her dedicated conversion. She learned that Christianity is about belief, but Judaism is about responsibility—about personally taking action to make this world a better place.

She visited Holocaust memorials and pledged to fight for what is right and is now a non-stop crusader for every worthy cause.  She fights against racism; lobbies Congress to fight anti-Semitism; rallies against Steve Bannon, the alt-right and the KKK; and collects diapers and food for refugee families recently granted asylum.

In the middle of it all, Juditz accepts an invitation to travel to Germany to visit an aunt and uncle (non-Jews) in Kaiserslautern. She buys and wears a “respectable German lady” skirt and silk blouse! She has meetings with many people who may or may not have done unspeakable things during Hitler’s reign, and learns that, in most cases, the Holocaust was carried out by ordinary people who gave their tacit consent.

But it didn’t have to be that way.  She learned that 85% of the Jews in Italy were saved because ordinary people hid them.  And neither Demark not Bulgaria agreed to deport Jews, causing the Nazis to back down.  These profiles in courage exercised the personal responsibility demanded by Jewish law.  Now she is one of them… 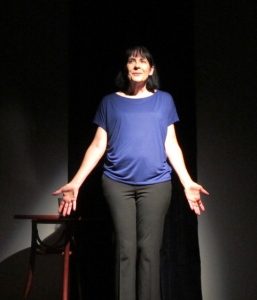 Jewish Women’s Theatre, recently voted “Best Live Theatre on the Westside” by The Argonaut, has once again produced a winner! JWT’s artistic director Ronda Spinak says Sacred Resistance, “Is in the tradition of JWT’s blockbuster summer hits that include Monica Piper’s “Not That Jewish”, Rain Prior’s “Fried Chicken and Latkes” and Annie Korzen’s “Annie Korzen Famous Actress”.  Like their predecessors, Sacred Resistance celebrates life with laughter, tears, and inspiration.”

Susan Morgenstern, Director of Sacred Resistance and Producing Director of JWT sums is up well when she says, “Juditz shares her journey with power and grace. Her show is a joyful ride—and yet even as we laugh with her at some of life’s unexpected twist and turns, we can’t help being moved to reflect on the best part of ourselves as well.”

A one-woman Art Show, Sacred Resistance, featuring the work of Laurie Katz Yehia, had an opening reception and art talk on July 7th, and runs throughout the duration of the performance of Sacred Resistance by Vicki Juditz. Yehia’s paintings are inspired by sacred texts and literature, as well as meditation, philosophy, personal experience, and the discourse of artists throughout history.

Tickets are $30-$45.  For more information and to purchase tickets, visit: HERE